When popular radio personality Gwen Shepherd married Bob Stennett at Old St Paul’s, in 1930, it was big news throughout New Zealand. Aunt Gwen, as she was know, was a broadcaster for children’s radio on 2YA, during the height of radio’s popularity.  At that time, children’s broadcasters were just becoming well-known personalities.  Her wedding was broadcast on the radio for her young fans around the country.

An amazing 2,000 people attended the service, with another estimated 30,000 listening on the radio.

The newspaper report of the day said that when she left her home in Kilbirnie there were already children lining the street ‘all cheering and cheery, eager for a peep at the bride’, and by the time she reached Mulgrave Street it was so full of crowds that she had trouble reaching the church, and then after the ceremony, had trouble leaving again, as can be seen in this photo below. 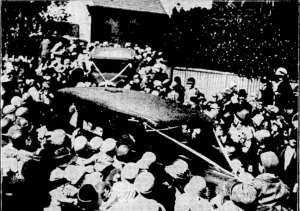 At the reception, ‘Aunt Gwen’ spoke to her young listeners around the country on the radio, so that the ‘distant little listeners-in might share in the entertainment’, as the newspaper reported.  She is shown in the photo below at the reception, with her 2YA microphone beside her.