Did you know one of the first guide units in the country was the St Paul’s Girl Guides unit? Established in 1924 the St Paul’s Unit gave many young women a sense of independence and an opportunity to learn new things. It remained an active part of the church until it closed in the 1960s.

Very much a product of its time, the unit was organised in a military fashion. It was divided into two ‘companies’ and members were given titles such as ‘lieutenants’ and ‘captains’. Those who joined were aged between 11 and 16 years old. Parents would drop their daughters off at the Sydney Street Hall on Friday nights before going off to do their late night shopping in the city.

The St Paul’s Unit acknowledged their duty to God, Queen and country by assisting in church services and serving the community. They would help clean the church, carry the colours into the church and read lessons. On one occasion when the Prime Minister visited for a special service, the girls stood as guards of honour as he came in and out of St Paul’s. They also paraded down Lambton Quay, accompanied by bands, as part of the annual Wellington Festival.

However, public appearances and helping the church were only a part of being in the St Paul’s Unit. Gaining life skills and experiences was also important. An Evening Post article from 1924 describes some of the early ambitions of the Girl Guide movement:

“Two of chief characteristics of the movement are to develop the girls physically and make them observant. To attain these walking and tracking are greatly encouraged. On a recent Saturday the St. Paul’s Guide Company spent an enjoyable afternoon tracking at Khandallah.”

Long-term congregation member Betty Plant (and later the first curator of Old St Paul’s, once it was opened as a historic place) led the St Paul’s Unit for many years. Indeed she ran two units – there were rules about how many girls could be in a unit – so she just ran two – which happened to meet at the same time and same place every week. She ran a camp every year where girls went hiking, built fires and cooked meals.

Former member of the unit, Dr Karen Palmer, remembers Betty as being someone who changed lives: she said that all the women who had once been in Betty’s guide unit would agree that ‘what she did was pivotal to the rest of their lives’. 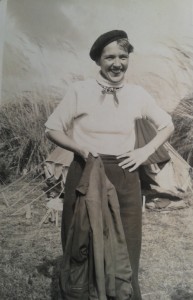 Karen recalls many  moments with the St Paul’s Guides that she has never forgotten. The guide activities and challenges made life exciting for her, especially in a time like the 1950s where opportunities such as this were hard to come by. This was where she found her niche, and built leadership skills and confidence that would be invaluable to the rest of her life.  Betty would bend the rules occasionally in the name of fun.  For a New Year’s Eve camp, the leaders celebrated with a brandy, lime and soda – even though alcohol on camps was strictly prohibited, the leaders were there before the official camp started.

Listen below to the clip of Dr Karen Palmer sharing her experience camping at Waikanae as part of the St Paul’s Guide Unit, and the impact that she had on many young women.