An intriguing note in a newspaper article of 1936 led me to the discovery of the maker of the beautiful litany desk (also known as a faldstool), which sits in the centre of the aisle at Old St Paul’s, and gave me an insight into the artistic lives of women in New Zealand in the late 19th century, and also into a lovely romance.  The newspaper stated that the litany desk was made by Mrs Harriette Crawford, who had ‘great skill in wood-carving’.   Her husband Alexander Donald Crawford was already known to be responsible for the skilful wood carving on the clergy stalls, which he made just before his death in the 1930s (story to follow).

Harriette Bennett was the daughter of a doctor from Bulls, and came to Wellington in the 1880s, and was one of the first students to study at the newly established School of Design.  The School of Design in Wellington, was modelled on the National Art Training School in South Kensington, London, and established in 1886. The principal was Arthur Riley, who had trained in London, and was quick to appoint female teachers. Woodcarving was the pre-eminent Arts and Crafts activity for women in the 1890s-1910s throughout New Zealand, Australia, the United Kingdom and the United States.

This gothic oak cabinet (below) was known to have been carved by Harriette while she studied at the school.  It is said it was made of the oak timbers from a shipwreck.  It is possible that the Old St Paul’s litany desk was also made from the same shipwreck timbers, as it certainly appears to be made of oak as well, and the carving on the desk looks remarkably similar to the carving work on this piece.

The litany desk at Old St Paul’s was carved as a memorial to Mrs Swainson, a much-respected teacher, who established the school that was to become Samuel Marsden, who also has a stained glass window in the church in her memory.  Both objects appear to have been donated to the church in 1898. 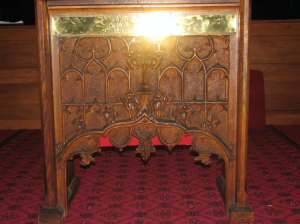 In 1891 Harriette married Alexander Donald Crawford, another keen woodcarver and a member of the Crawford family who once owned all of the Miramar Peninsula, and the couple lived at Overtoun, a large Arts and Crafts style house in Miramar, which was also decorated with her carvings – including the handrail and the piece of furniture in the image below. 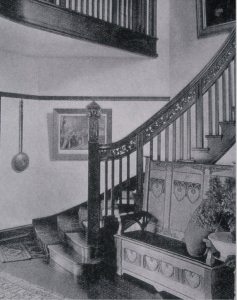 Harriette’s husband died in the 1930s, and she was completely grief stricken – I found a letter in the Alexander Turnbull Library in which she writes of her house, Overton:

this place is lovely now … but the dear man has gone and all the joy has gone from my life.  My only comfort is that he was happy and I helped in that.

It is nice that the work of the couple continue to stand close to each other in the church, as seen in this photo below, with Harriette’s litany desk in front, and the stall carved by her husband behind it to the right. 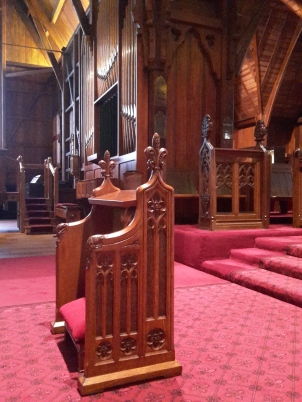 Images and Sources: Wellington Technical College wood carving class, 1897, Ref 1/2-174106-F, Alexander Turnbull Library, Wellington. The image of cabinet is from the book Ann Calcoun, ‘The Arts and Crafts Movement in New Zealand 1870-1940: Women Make Their Mark’ (2000).  That book and Ann’s subsequent ‘Arts and Crafts Design’ (2015), (http://www.artsandcraftsnz.co.nz) are the sources for information in this story, as well Evening Post, 30 October 1936, p.9. The image of the interior of Overtoun is from the Ladies Mirror, 1 Nov 1923. Other images, Elizabeth Cox and Heritage New Zealand.

One thought on “A wood-carving romance”