Throughout the 19th century the Wellington newspapers sent their long-suffering journalists out to review the Christmas decorations in all the city’s churches, often in quite some detail.

In 1880 the Evening Post decided that St Paul’s carried off the award for the best-dressed church in Wellington that Christmas:

the graceful branches of nikau palm and tree ferns were freely used, also mosses, white lilies, scarlet geraniums and other brilliantly coloured flowers, while the scrolls being Scripture texts were very artistically carried out.

The church was often decorated with native plants, although of course they do not add a lot of colour, so any colourful flowers that could be found were greatly valued.

In 1887, the church was, according the newspapers, decorated with great taste, and the ornamentation was probably better than on any previous occasion.  The altar frontal was of white, with white and gold hangings; nikau palms were used, and the altar and font decorated with white flowers.  We have a copy of letter written by the Rev William Lush, who was a curate at the church at Christmas that year, where he proudly describes to his family the work he had done on the decorations, including ‘a white dossal [ornamental cloth] for the Altar of white flannel, it does not look bad, we had it nicely adorned with red geraniums’.  He wrote that he hoped to be able to keep the decorations up until Candlemas (the 2nd of February), in keeping with what he said was the ‘ancient English custom’.

Christmas at St Paul’s in 1891 did not sound quite so festive – the Church Chronicle recorded that while there was a large attendance at the Anglican services throughout the city:

very little attempt at decoration was made at St Paul’s. Lilies and marguerites were used to festoon the communion rails, reading desk etc., but beyond this there was nothing…There was nothing special in the music, owing to the absence of nearly all the leading members of the choir.

Two years later, the church did a little better, with what sounds like a stunning display, with the church decorated from the transept to the communion rails with ‘a perfect bower of ferns, flowers, and greenery’ with white flowering ivy and other vines entwined around the columns, and white flowers interspersed with red rata flowers.

The use of scripture texts written out and placed around the church at Christmas was fairly common.  This took a more permanent form in 1883 when the church was gifted the beautiful new illuminated panels by Charles Barraud, a member of the congregation and noted artist, which added scripts to the space below the clerestory windows, just in time for Christmas. 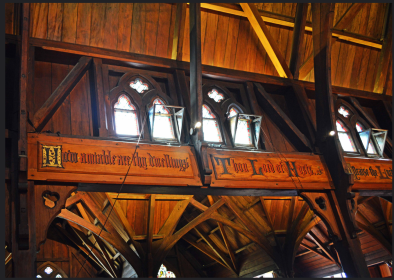 Christmas trees, which decorate the church at Christmas today, certainly did not make an appearance inside the church in these years, but they were often mentioned in connection with the St Paul’s Sunday School Christmas parties and the Christmas fundraisers run by the ladies of the parish, held in the Sydney Street rooms, which served as the parish hall.

Since 1934 the altar at Christmas has been decorated with the cream altar linen known as the ‘festive set’, made of silk damask with beautiful embroidery by Emily Steele, now augmented by an altar frontal made by the women of the parish for the Queen’s visit in 1954.  You will these frontals still decorating the altar today.

See also the associated post Christmas Gifts for a Church.