There are fourteen memorials in Old St Paul’s to men who died in World War One.  Three of these ten died on the same day – 15 Sept 1916.  This is the story of one of those ill-fated men.

John Allman Marchant was a member of a family that had a long connection with Old St Paul’s.  In fact the church also contains brasses memorialising three other members of his family – his father, Surveyor General John William Allman Marchant, his mother Maria Elise, and his notable sister, also Maria Elise, but known as Ella, who was principal of Otago Girls High School, and the founding headmistress of St Mary’s Diocesan School, Stratford.

Rush to War
After war was declared in August 1914, a rush of 14,000 men volunteered to go, and by October 8,500 men of the main body of the New Zealand Expeditionary Force was ready to go.

John was clearly desperate to go too.  He tried three times to convince the army recruiters to take him, twice in Wellington and once in Auckland, but a combination of his age – he was 45 – with the fact that he had had rheumatic fever as a teenager meant that they turned him away.  He was not, however, a man to give up easily.

He travelled to Ashburton, and presented himself again to the army there.  He had found a doctor to pass that he was in good health. He falsified his age, keeping his birth date but changing his birth year to make himself young enough to go. He also changed his name to John Martin.  Required to list a next of kin, he also appears to have invented a sister in England.  He also testified to being a labourer, but had actually been the manager director of a sawmill before signing up.  He told the army his address was Ashburton’s ‘Federal Coffee Palace’ (“coffee palaces” being the name of alcohol-free hotels).

This attempt was successful, and he left the country in February 1916.  He arrived in France in April and excelled himself in the trenches.  He was put in charge of his battalion’s group of scouts, as he wrote back to his sister Ella. He describes one day where he and a group of friends fought a patrol of five Germans and killed them all, and also described getting a bullet through his lower lip: ‘it only loosened some teeth and I spat it out’.  He had been recommended for a promotion but had turned it down twice – he writes to his sister ‘you can guess why’ – presumably because of his falsification.

His letters to Ella show that he regretted his actions before he left New Zealand – although whether the falsification or something else is not clear.  He had left the country without telling his family he was going, and then wrote from France in April 1916 to say he was there, saying: ‘I do not deserve much fortune and can only hope to do my duty so throughly that perhaps I may be forgiven things of the past.  Why all of you should have to suffer for the sins of such as I passes my understanding, but knowing how you do suffer affects me more and more as time passes’.  He nevertheless wrote ‘I am fully convinced that I will see the business through.  I seem suited to this life’.

In another letter to Ella, written just five days before he died, he wrote ‘Pass this [letter] on to those at home and tell them I wish that I was able to be a different man to what I have been’. He relays in this letter that New Zealand is about to begin its ‘great push’ – meaning, as we know now, that New Zealand was about to join the battle of the Somme.  On 15 September, the day John died, 6,000 New Zealanders joined the battle – but by the end of the day, although they had succeeded in taking the village of Flers, 600 had died and 1,200 were wounded or missing.  It was to be the worst day in New Zealand’s military history thus far, (hence why there are three memorials in the church to men who died on the same day), although in 1917 it was surpassed by the miseries of the battle of Passchendaele.

John received a posthumous citation for his bravery that day: ‘For gallantry and devotion to duty on the 15th September 1916 near Flers. When his platoon commander was killed Sergeant Martin assumed command of the platoon and by handling them with coolness and skill assisted largely in the capture of the trench. This N.C.O. has performed conspicuous good work since the arrival of his unit in France last April’.

Proof
Eventually, his family became aware of his death – a friend of his who had been wounded asked that they be told – but they then faced a terrible problem.  They were desperate to have the bravery of their son and brother acknowledged, but he had fought his whole war under a false name.

His father and sister had to give evidence to the court to get his military record corrected.  They produced his letters back to New Zealand, although nowhere in them did he admit directly to the lies, as the censors were reading them.  They were supported by a number of soldiers who had known him in New Zealand and then met him again in France going by a different name, and by a policeman who testified that he’d fleetingly seen him in uniform in New Zealand before he left.  The file also contained photographs (as seen below) of him, and people testified that they had seen that person in France.

His probate file and his military file, now held at Archives New Zealand, makes fairly miserable reading, as his family were left to present evidence of what their son had done, and that he had left them without saying goodbye.  They contain the letters quoted above, and his father’s description of his son: ‘he was of medium height, sparely but strongly built … was of a nervous excitable temperament … He was a splendid worker, strong-willed, determined and persevering’. 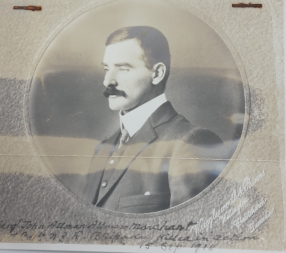 Eventually they were successful, and the court agreed that he was the man they said he was.  His military record has scribbles all over it to make the corrections:

His correct name also appears on the Ashburton War Memorial, and the family were eventually issued with his posthumous medals.

Sadly, all the characters in this story died in quick succession – John died in September 1917, but unbeknownst to him, his mother had died in New Zealand just two weeks earlier; his sister Ella followed in 1919, and his father (who had been a churchwarden and vestryman at St Paul’s) in 1920.  John’s name is placed on the same cross as his mother, and states that he was ‘killed in action at Flers’.

The memorials in Old St Paul’s to John’s sister Ella on the left, and on the right, the memorial to his father above, with the double memorial to mother and son below.

***********
One of the other men who died on the same day was Tom Higginson, about whom we have already written a story, which you can see here.