The role of the church as the quasi-national cathedral for 98 years meant that it has been used for many state funerals over the year.  Perhaps the biggest was the 1906 funeral of Richard John Seddon, in 1906, as shown below.  Further images are contained in this story.

Mourners gathered outside Old St Paul’s for the funeral of Richard John Seddon, 1906

Old St Paul’s also accommodated the first state funeral given for a private citizen, Sir Frederick Truby King, in February 1938. So great were the flowers donated for the funeral that two trucks carried them to the church (as seen in the image above).  Plunket nurses and committee members took turns to stand guard for 10 minute intervals at the four corners of his coffin for the three hours before the service.

Others who have state funerals at Old St Paul’s include military leaders such as Sir Howard Karl Kippenberger and statesmen like Sir Maui Pomare. 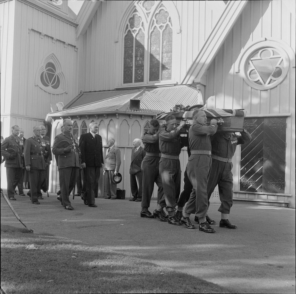