James Marriott came to New Zealand in 1843 and rapidly set himself up as the father of New Zealand theatre.  As his biographer, Peter Downes wrote, he had an extraordinary variety of achievements.  For his second ever production, in 1843, Marriott built New Zealand’s first theatre; as Downes says, not only had Marriott ‘founded the group, selected the programme, directed the players, and performed leading roles; he had also designed the theatre, helped build it, decorated the interior and painted the scenery’. This was the beginning of an illustrious theatre career.

But he had many other talents (he has was reputed to have said that he ‘did a bit of everything “from chiseling tombstones to putting in ladies teeth”.’)  As Downes writes:

As an engraver he was frequently called on to supply illustrations of prominent events, and many gravestones in the Bolton Street cemetery also carry evidence of his fine craftsmanship. From the early 1850s until 1885 he ran a small but highly esteemed bookselling and stationery business on Lambton Quay. He was instrumental in founding the Oddfellows order in Wellington in 1843 and was a tireless worker for the Mechanics’ Institute and the Tradesmen’s Club. Marriott also held several minor provincial government offices, including sergeant at arms, inspector of weights and measures, registrar of cattle brands and registrar of dogs. 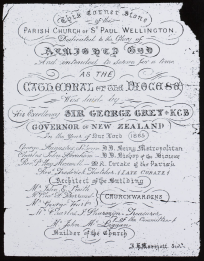 There are definitely two – and probably three – examples of his work at the church, and he was also involved in an important event in the church.

One of the examples that you can see is the trowel, which was used by Grey as part of the laying of the foundation stone.  Marriott engraved it after the ceremony and he and Bishop Abraham presented it to Grey; Grey complemented Marriott on the ‘chasteness of the design’ and the elegance of the inscription and scrolls.  The trowel is on display in the church.

The other example of his work is one of the memorial brasses in the baptistry near the entrance, which has a rather unusual history.  It marks two occasions that predates the church by twenty years, and it is  not clear how it came to be in the church.  The brass was erected by Joseph Rhodes in memorial of the four sailors who died in his service, two in the wreck of the Matilda in 1848 and two in the wreck of the Petrel in 1849.  The brass is unlikely to have come from the first St Paul’s, as in October 1866, just after the new church was opened, a newspaper article describes it being found in an outhouse among a heap of wood during a house auction.  It must have been presented to the church at some stage, but nothing much done with it, as another newspaper article in 1883 describes finding the brass St Paul’s, just resting against the skirting board, a ‘simple but touching memorial’. The report said that the tablet was made of copper ‘corroded with age and verdigris, and judging by the screw-holes on it, to which still adheres a quantity of plaster, it was once attached to a monument of some kind or other’. The newspaper urged that it be given a more prominent place than the skirting board. Soon after, Marriot wrote to the paper say that he had made the memorial plaque himself in the 1840s, and that he believed it was the first to have been made in the colony.

The event he was involved in was the laying of the foundation stone, and the part he played seems like the sort of thing that would have appealed to his dramatic side.  When the church’s foundation stone was being laid, he walked at the front of a little procession of people, including the Bishop and Governor Grey, bearing a crimson cushion on which was a plate of silver coins, a little hammer and the trowel, for use in the ceremony. I’m not sure why he was worthy of having this role in the ceremony, but presumably because he had carved the stone.  Marriott continued his varied career until his death in 1886. 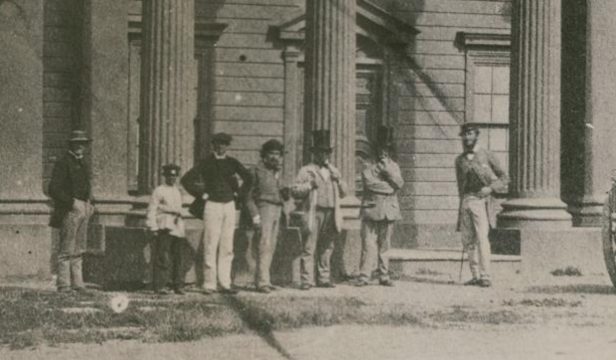 James Marriott, (fourth from left), outside the Oddfellows Hall, Wellington