One of the more unusual brass memorials in the church is to four members of the Wellington Submarine Mining Volunteers, remembering men who died from 1903-1905.  Given that New Zealand was not known for its wars at the turn of the twentieth century, why was there a submarine mining volunteer corp at all?

The answer lies in what is known as the ‘Russian Scare’ of 1885, which grew out of disputes in Afghanistan between England and Russia, when the New Zealand population and government feared the country could be invaded by the Russians, which led to a large number of fortifications being built along the coastline. By 1895, coastal defences in Wellington extended over the whole of the northern area of Watts Peninsula from Scorching Bay to Shelly Bay. Their job was to maintain permanent mines that were laid in the harbour, to see off the Russians if they arrived in the city, flag signalling and other tasks.  They were based at Shelly Bay, as pictured in the image above. 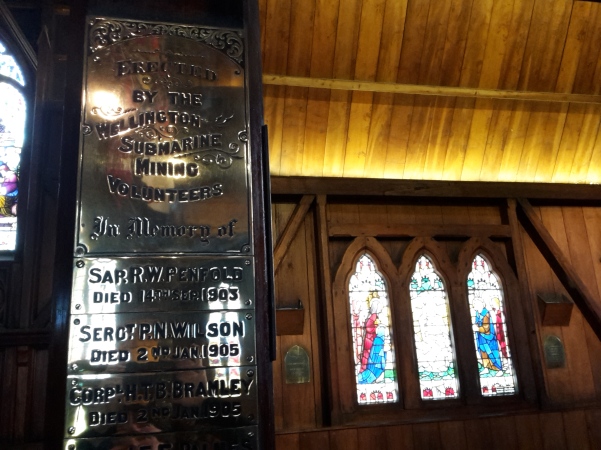 One of the men, Sapper Penfold, died when accidentally shot in the back when checking his target during target practice; Sergeant Wilson and Corporal Bramley  drowned together while fishing near Barret’s Reef, and the reason for the death of the forth man, L. Corpl. Palmes, isn’t clear.

The Rt. Revd. Thomas Henry Sprott, the vicar at St Paul’s, was also the chaplain of the Corps when the brass memorial was unveiled in 1908, and told the gathered crowd of the memorialised men’s comrades and family that there was no more fitting place in which to perpetuate the memory of their comradeship than in ‘the house where they were accustomed to meet together as members of a living family and as citizens of a divine colony’.  It was apparently a touching service, with the congregation gathered around the pillar which had the brass attached, around which a Union Jack was wound, and a choir of boys singing a hymn.  The comment was made that the brass plate is ‘so arranged that the future deaths of members of the Corps can be recorded beneath those already placed there’.  However, in the same year the corps was disbanded and folded into the Garrison Artillery Volunteer Division. 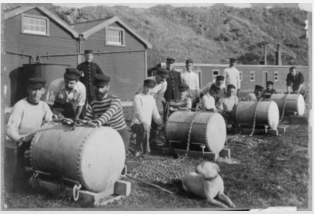 Images of the Submarine Corps in 1899; including an underwater explosion