A film ‘Crown of the City’, made in 1946, and preserved by Nga Taonga Film Archive sets out the arguments as to why the city needs a new cathedral, despite the Second World War having just ended and money being desperately scarce.  The film argues that while Wellington is ‘on its a way to being a very great city’, it needs a cathedral to make it really special.

The films shows the developing ‘government centre’, but as for religion, the voice-over says rather mournfully, ‘well, at present we don’t seem very proud of religion’.  The voice-over concludes that ‘Dear Old St Pauls’s hasn’t got what it takes to be our Westminster Abbey’.

The Bishop of Wellington, Bishop Holland, and the mayor of Wellington, William Appleton, then set out arguments as to why as to why the city needs a new cathedral, and shows an architectural model of the planned cathedral. 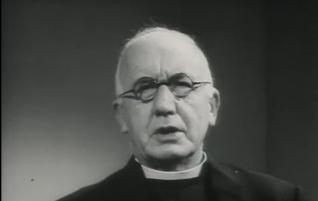 The movie also tries to pull on the heart strings by showing a troop ship returning from the war, and promising that within the cathedral a chapel of remembrance would be built which would contain books with the name of every person who died in the South African, First and Second World Wars, and that it would become a national shrine.

Stills taken from the film.