When Old St Paul’s was first taken over the government in the 1960s, a flurry of research was undertaken by historian Margaret Alington and others, trying to uncover the mysteries of the church.  One such research project undertaken by Margaret was about the Bishop’s Chair. One of Margaret’s many files held at the Alexander Turnbull Library records the fascinating journey she took to find out the mysteries of this chair.

The chair was first mentioned on the 28th of October 1895 at a general meeting when a member brought up ‘sundry matters’ such as the church needing a suitable chair and desk for the Bishop. Therefore, just after Christmas 1896 the Evening Post newspaper reported that the Bishop ‘thanked his congregation for their gift of a chair and desk placed in the sanctuary for the use of himself and his successors.’

A bishop’s chair is called a cathedra – and hence a church containing the bishop’s chair is called a cathedral.  This particular one is an ornate dark wooded chair with the inscription MONACUS GLASTONIE on the back and JOHANES ARTURUS on the arms. The arms are also adorned with grape vines, oak and acorns. Margaret followed every single lead possible to find out anything about this chair. She even wrote to S. Jervis of the Department of Furniture and Woodwork at the Victoria and Albert Museum in England if he knew anything about it. Unfortunately, he did not have much information on the specific chair, as it was a common piece in Victorian churches. He could say that it was in the style known as ‘Glastonbury’; this type of chair was known as a Glastonbury chair as it is copied from the chairs developed by a monk at the medieval abbey of Glastonbury, and in particular one belonging to Richard Whiting, the last Abbot of Glastonbury Abbey, who was killed by Henry VIII during the dissolution of the monasteries in 1539. The words engraved in the St Paul’s chair are slightly abbreviated copies of the words in this original chair. 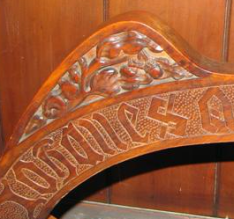 Where was it made?

The rumours and style all suggest England. However, thanks to Margaret, we do know that the wood’s ‘microscopic structure matches that of Rimu’: she had a tiny chip collected and sent away for analysis by R. N. Patel at the Botany Division of the Department of Scientific and Industrial Research. Because it is made of a native timber, it was definitely made in New Zealand.

‘Mason & Son, Auckland’ is pencilled onto the underside of the chair. Margaret wrote to John Stacpoole from the Auckland City Council for help on this matter. He found a carpenter that fitted the name. He wrote that ‘there was a well-known cabinet maker, John Mason of Durham Street … His name appears in the Auckland directory for 1868.’ Stacpoole also found John Mason’s advertisement, which went: ‘Kauri, Rimu, Cedar and Walnut are available’ and books of designs were kept which demonstrated ‘that the fashion in London at the present day is for medieval and Elizabethan styles.’ This certainly sounds like he makes Glastonbury-styled chairs for bishops.

When was it made?

The dates it was made was still a bit of a mystery. Mr Jervis of the Victoria and Albert Museum wrote that ‘…there is no reason why it should not have been bought new in 1896.’ I think he was a bit bemused as to why Margaret from New Zealand was asking about such a fairly common piece of furniture. However, his information was helpful, as it narrowed its date to between 1836 and 1896.

To narrow the dates down further, Margaret looked at John Mason. He died on 27 March 1872. Margaret’s hypothesis was: ‘it seems, then, that the firm may not long have outlasted John Mason himself, so that the chair, if made by Mason & Son, probably dates back to the 1860s or early 1870s’.

Now, thanks to the wonders of the website Papers Past, we can find out more about John Mason, including that he invented a new butter churn, and a machine to assist with gold mining, which was all the rage in the 1860s, and also that he was heavily involved in the display of exhibits at the famous New Zealand Exhibition in Dunedin in 1865, where he put on display, among other things, a large collection of specimens of New Zealand native trees he had made himself, each in book form which opened on hinges, inside which were displays of the branches, bark, foliage and flowers, all arranged on a large bookshelf he had also made from New Zealand timbers.  In his newspaper adverts for his cabinet making business, he often finished with “NB – Best prices given for Whales Teeth”.   We can also see that just after he died in 1872 his cabinet-making tools and inlayed woods were put up for sale, along with whales teeth, and a large native wood bookshelf. 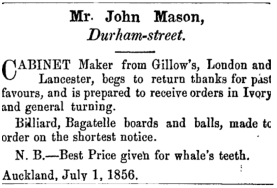 Where is it now?

Bishop Wallis, and every Bishop of Wellington after him, used the chair while he was involved in a service at St Paul’s, until the new Cathedral of St Paul was opened in 1964. When the new cathedral opened, the cathedra remained at Old St Paul’s, where it sits in the sanctuary, below a brass plaque dedicated to Bishop Wallis.  It sits together with the prayer desk which has Bishop Wallis’ coat of arms on it, both of which were given to him on Christmas Day 1896. 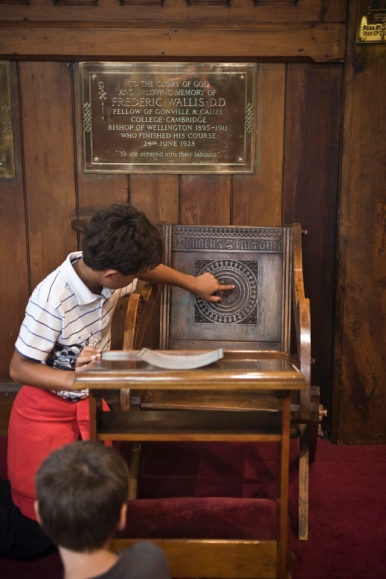