The Bells of the Cathedral of St Pauls

In with the new(ish), out with the old: that was the thinking of the new Cathedral of St Paul’s in the 1970s. The bells of Old St Paul’s were taken to the new cathedral temporarily, then they melted them down to make new ones.

When the new Cathedral of St Paul opened in 1964, there was a question of how to supply the cathedral with bells. The remaining two bells from Old St Paul’s ­‑ whose future was uncertain – seemed the best choice. They were last rung for Old St Paul’s on the last Sunday of April 1964 and hung in the new cathedral by the 28th of May, 1964.

St Paul’s Cathedral c 1972, newly completed. The original Old St Paul’s bells would have been rung from here when this picture was taken.

They were only temporary however, as the Very Reverend James Thomas made arrangements to get new bells for the Cathedral. He decided that 14 bells were needed, making it one of the largest rigs of bells in the world! The Reverend asked a travelling parishioner to ask about bells that weren’t needed in the United Kingdom. Eight bells were found from the 130 year old St Edmund’s Church, Northampton which was being demolished. Of those eight, most kept their original shape, but one was recast.

The other six came from various places. The two original Old St Paul’s bells were melted down and contributed to four smaller bells and one huge one. The Old St Paul’s bells are part of bells called Little James, William & Mary, Lydia & Hendry, Flora C. Mallard, and The People’s Bell (which weighs over a ton!). The People’s Bell was paid for by 1,273 ‘Honorary Bell Ringers’. The last bell was called the ‘Francis Bell’ and was bought in tribute to two Sir Francis Bells. The bells were all sent to John Taylor & Co in the United Kingdom, retuned and recast if necessary and sent back in 1982. This cost $93,000 altogether, including recasting, retuning and rigging.

See the bells at Wellington Cathedral being rung in this video:

Unfortunately we have lost two of the original bells of Old St Pauls, but due to sheer luck,  one bell was saved! This interesting story can be read here.

The Restoration of Bells to Old St Paul’s 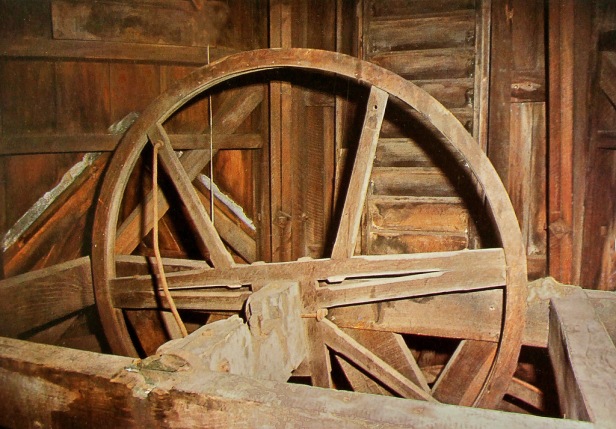 As told in this story, at the time the government took over Old St Paul’s and carried out its major restoration project in the 1960s, all that remained in the church tower was the broken bell change-ringing mechanism and the one old ship’s bell; the historic 1867 bells had been removed to be taken to the new Cathedral in Molesworth Street.

In the 1970s, a campaign to restore bells to the Old St Paul’s tower began. Patrick Lawlor, respected Catholic layman and Wellington journalist, wrote a report on restoring the old bell mechanism. He wrote:

the restoration of this ringing mechanism will be in integrity with the long traditions for change-ringing it was developed from when it rang out for years in the early life of Old St Paul’s.

After a major fundraising effort by the Friends of Old St Paul’s, five new bells were made especially for the church at Whitechapel Foundry, a British company who had been making bells for 400 years, making bells with traditional methods. The bells are made of bronze.  The mold was made first, then the bells were cast. When the metal cooled, they were tuned by carving out the inner surface of the bell with a vertical lathe. 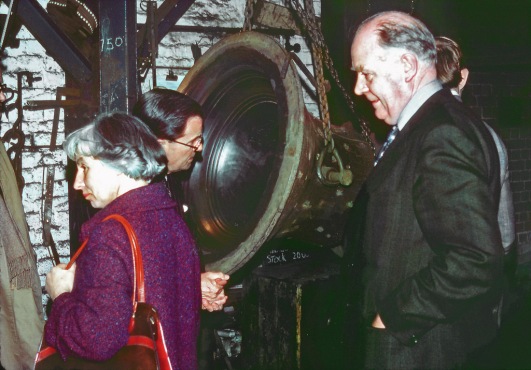 The cope (mould) for one of the recast and tuned bells for Old St Paul’s restoration at the historic Whitechapel Foundry. (Representatives from the NZ Commission inspecting the bells). Photo Peter Sheppard.

They were all inscribed with different sayings. The Tenor (the largest bell) has ‘These bells were cast during the restoration of Old St Paul’s for the people of New Zealand. They replace those which rang out Wellington’s first peal on 31st March 1867’. The treble, the smallest bell, says: ‘To the Fragrant Memory of the masters of 100, 200 and 300 years ago’.  The inscriptions on the other three bells match those that were once on the three original bells.

The bells, with the wooden wheels behind, arriving at the church to be installed, 1979.
Photo: Peter Sheppard.

The bells and mechanism are known as the Restoration Ring. It was first rung by the Old St Paul’s Guild of Bellringers on the occasion of the Bell’s Dedication on 27 October 1979.  The new bells, being five in number rather than the original three, are far more useful and interesting for bell-ringers to use, and provide a combination of 120 different possible ‘changes’.

Architect Peter Sheppard from the Ministry of Works, who was in charge of the restoration project, also took on the project to oversee the installation of the bells, using the restored original frame.  The Ministry also provided lighting in the tower and a clear panel to allow visitors to see the bells up in the tower (as seen in the main image above). Some inconspicuous alterations were also required, as the bells, when swinging, exert horizontal thrust of nearly 2.5 times their own weight. New foundations were added under the tower, and tie rods were added through all four sides from the outside to tie the tower to the upper level.

Now Wellington has two of only seven full change ring bells in New Zealand.  The Wellington Combined Society of Bell Ringers are responsible for ringing of the bells at both Old St Paul’s and the Cathedral; no-one else is allowed to touch the bells as serious damage could be done to the mechanism, and the society rings the bells on some Sundays and for special occasions, including the recent 150th anniversary.

One thought on “‘Ringing in the New’: the Wellington Cathedral and Old St Pauls Bells”