On 9.30am on 16 December, 1929 Canon Percival James, the vicar of St Paul’s and a ‘modern’ thinker, held his first Sportsmen’s Service as an alternative to a regular Sunday Service. It was a short half-hour version of morning prayers; four hymns and a short sermon.  The philosophy of this service was  to get the spiritual side of life done before sport, so that both devotional and recreational renewal could be undertaken on the same day.

The idea put forward by James of supporting sport on a Sunday received comment from all over the country.  It was too much for some clergy. In the lead-up to the first service there were a lot of comments in the newspapers, which we can now read with the open mind of today’s society.

Reverend Marsh of Devonport, Auckland said of Canon James: ‘We love him for his ingenuous charm, but are forced to believe that he is, after all, an ecclesiastical Peter Pan.’ Marsh didn’t think we needed to allow people to do sports, saying ‘it is ridiculous to pretend that we do not pay more than due homage to physical needs.’ (This remark is interesting in light of the campaigns for ‘physical needs’ that are around today!)

Reverend J. W. Kemp went as far as to say ‘it is a somewhat grotesque idea, and my opinion is that sportsmen will merely snap their fingers at the suggestion and pay no attention at all.’ He would be proved wrong.

Canon James did not seem to be shocked at the backlash: ‘religious people are naturally conservative. There is always severe criticism of anything new.’  He also commented that he had letters of support from people all over the country who wanted spiritual, mental and physical renewal on a Sunday and that ‘for the churches merely to judge and condemn these brothers of ours seems to me a calamity. We should do all in our power to show them that they are welcome in their father’s House’.

Sportsmen’s Services weren’t entirely new, as they had been in England as early as 1908. The Reverend at St Andrew’s Church in England started them to answer the ‘need for discovering some means of attracting those who are usually non-churchgoers.’ And in 1914 in New Zealand there was ‘an original feature of a sportsmen’s service’ held at St. Columba’s Church Hall, Grey Lynn, Auckland. 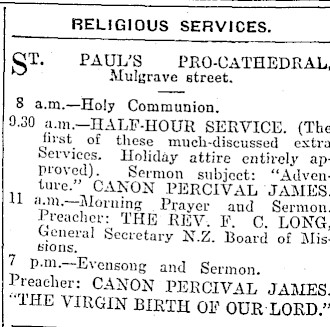 Advertisement for the ‘much discussed’ Sportsmen’s Service. Evening Post, 14 December 1929.

The first service at St Paul’s in 1929 was attended by about 150 people, mostly young people, and attracted a larger amount of men than usual. Some of them were dressed in ‘flannels and similar holiday attire’, which had been encouraged by Canon James.

The topic of the sermon was ‘Adventure’ and was advertised in advance.  Canon James asked ‘take the spirit of adventure out of life and what is life? It becomes the dull, monotonous round of day after day, week after week. … The greatest adventure of all is religion’.

The success and merit of the service is best described by Canon James himself:

‘My faith has been justified … We have made a good beginning. I was much impressed by the reverence and the earnestness of the congregation. Those who thought it right to describe this service as an insult to God may reflect that the value of the devotions of people does not depend entirely on the time spent upon the devotions, but rather on the reality and simplicity of those devotions. I have no doubt that the service was worthwhile.’

This sentiment was echoed by The Truth newspaper the following March, when the writer said that Canon James’ Sportsmen’s Services ‘have proved that it is possible to discharge one’s spiritual obligations and at the same time enjoy harmless healthful outdoor recreation during the rest of the day.’

The Reverend J. Lawson of Christchurch made a good point: ‘Religion is not a static thing; it is always progressing.’ Canon James helped progress religion with sport; a true kiwi!

For another story about Canon James, see here.