One of the soldiers who died at the Somme during World War One who has a memorial brass at Old St Paul’s is architect Austin Quick, who died exactly 100 years ago today.

William Beynon Austin Quick, known as Austin, was pupil at Mrs Swainson’s School in Fitzherbert Terrace, along with Rainsford and Willie Balcome-Brown and Tom Higginson, all of whom died in World War One (and all of whom we have written stories about, as they all have memorial brasses in the church).  Austin later attended Victoria University, and university’s magazine described him after his death as ‘of a reserved disposition but sterling character’.  He formed an architectural partnership with his friend Charles Fearn in 1913, and then just before the war began they were joined by William Gray Young.

The three partners all volunteered for military service.  Gray Young was considered unfit for overseas service, Fearn served in Egypt, France and Belgium, and Quick served in Egypt and at Gallipoli.  After being very ill, he rejoined his battalion in France at the end of 1916 and was killed soon after, on 10 Dec 1916, while serving in the machine gun section.  In a letter to his mother, his sergeant wrote : ‘Although so short a time with the guns, he was one of the most dependable of men and could always be relied upon to do his duty faithfully, and to the extent of his ability. Indeed it was while performing his duty with his customary courage and coolness, that he met his death’. 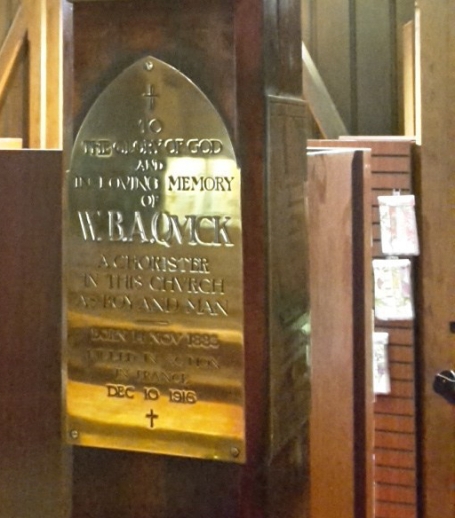 His memorial brass in Old St Paul’s reads that he was ‘a chorister in this church as a boy and a man’, which I rather like.  He was the son of William Henry and Ann Elizabeth Quick.  Ann was a member of the Old St Paul’s congregation for 45 years, and his father was a prominent member of the Church of England in Wellington, holding the position of Chancellor of the Diocese of Wellington and many other positions, as well as being a lawyer and city councillor.

Fearn returned from the war in 1919 and worked again with Gray Young, and they lived for 50 years and 45 years respectively longer than their friend, both becoming very distinguished architects.  Gray Young later designed the only major addition to Old St Paul’s made in the 20th century – a flat-roofed room for women choristers to use to change into their robes (now used as offices).