Exactly 50 years ago this week (Nov 1966) the government finally stepped in to save Old St Paul’s from a fate of demolition or relocation to another site.  It had been a long and painful road to get to that point, with 12 years of waiting before the church  were willing to sell, and the government was willing to buy.

Since the 1950s, when the planning for the new cathedral in Molesworth Street had begun in earnest, the Anglican authorities had had various schemes for how the beloved old church, now surplus to requirements, should be used, always sincerely holding on to their belief that the best solution for the church was to find a way in which it could continue to function as an active church, even if that meant cutting it up and making it into a lady chapel, or carting away over the hill to the Wairarapa (as discussed here).

But finally, in March 1966, when all other options had drifted away, the Bishop and Dean of Wellington visited the Prime Minister in his office to offer to sell the church to the government.  The government accepted this offer in November 1966, and issued instructions to the Ministry of Works to oversee the restoration works at the church, which by that point were well overdue, as regular maintenance had not been carried out for many years.

Restoration begins
The church was very fortunate in the two architects at the Ministry of Works who were given the task of overseeing the project to restore the church, first Jim Bentall and then Peter Sheppard, who cared for the church for more than a decade, and worked on it from the foundations to the spire.  All the photos in this story are taken by Peter and Jim.  Peter’s father, Fergus, had been involved in the saving of the church, along with many other Wellington architects.  Reflecting many years later on the work that Peter did on the church, Chris Cochran, another conservation architect, said that, many years before formal conservation planning was common in New Zealand, Peter had ‘managed the restoration with a remarkably sure hand, displaying a dedication to conservation principles that would not have been out of place several decades later’.

Once the church was taken over by the government, a series of urgent works began, particularly to ensure that the weather stopped getting in, and the church completely repainted, and fire sprinklers installed.  The stained glass windows throughout the church were also removed and rebuilt, including the replacement of the lead jointing.

One of the biggest projects was the repair of the north transept wall, which was always the poorest-built section of the church.  This is the area which is being worked on in the image below (Dec 1968).  The new wall was faithfully remade to match the original construction. The joinery for the window in that wall, known as the People’s Window, was completely remade – you can see the new joinery for the window in the image below, before the window was returned. All the interior timberwork for the new wall was carefully chamfered and edged to match the original.

Another project was the slating of the main spire, as well as few of the smaller roofs.  Although the Welsh slates look so natural on the church these days, actually for the first 30 years of its life the church had timber shingles, then corrugated iron from 1895.  In 1924 much of the roof was slated, but not the spire or baptistry, so by the late 1960s this iron was in desperate need to replacement.  It just so happened that the old Custom House on the waterfront was being demolished, so the slates were used on the spire of St Paul’s. 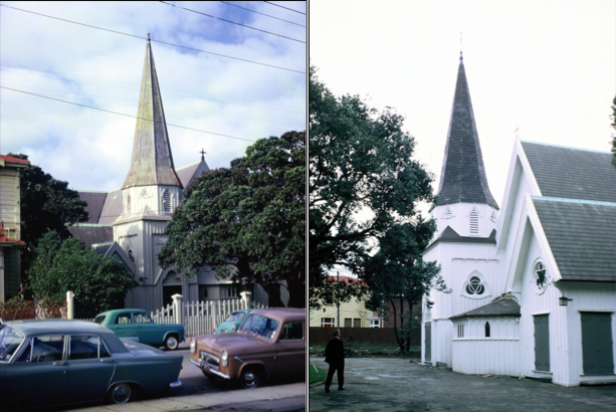 Before and after – the church before and just after restoration, 1960s, with new slate on the spire and new paint.  Jim Bentall.

The Ministry of Works also replaced the 1.8m high spire cross for the top of the spire, which had been taken off the church several decades earlier and lost.  The original design for the spire cross was carefully copied from old photos and remade.

The church was also fumigated for borer, by being completely enclosed in a custom-made plastic tent, and the whole building filled with methyl-bromide for 24 hours.

The rotten foundations were also replaced with concrete.  Below is an image of the state of the old foundations.  Once that had been done, the bolts and ties in the upper framing could be tightened, and a system of new braces added into the areas that had had none.

Many other tasks, such as the addition of new toilets, heating and lighting, were all achieved while still protecting the special atmosphere of the church.  Sheppard also oversaw two major projects in the 1970s – the replacement of the Lewis organ, and the installation of the new bells.  He ended his involvement with the church in 1980.

As documented on this website, the church has had much to thank a whole series of dedicated architects – not only its first architect Frederick Thatcher, but also Christian Julius Toxward and Frederick de Jersy Clere, who made changes to the building while still upholding the ideas and spirit embedded in it.  Likewise, the 1960s and 1970s restoration by the architects of the Ministry of Works ensured that those ideas and that spririt will continue for many more centuries.  In 1978, the restoration won a New Zealand Institute of Architects National Architecture Award.  The judges comments that it was ‘a fine example of restoration carried out with world class consistency to a building that is a vital part of New Zealand’s heritage’.  The building was fortunate indeed.