Ian Calcutt Findlay is another of the men who died in World War One who are memorialised at Old St Paul’s. He died, at only 18 years of age, at Flanders.

Ian was born in Wellington and was educated at Wellington College, and from 15 at the Imperial Service College in England, before attending Jesus College at Cambridge University. He was the son of Sir John Findlay, who was a lawyer and politician ‘renowned as a courteous, eloquent and learned man with strong humanitarian principles’, who served as New Zealand’s Attorney General and Minister of Justice.

Findlay arrived at Cambridge in October 1914, only three months after the start of the war. He was only 17 years old. Unable to serve until his 18th birthday in December, he was one of a very small group of undergraduates left in the venerable College during the last term of 1914; almost all of the men studying there had already left for the war, and very few new undergraduates had entered.

Sir Arthur Quiller-Couch, author and Professor of English Literature, described that first bleak term at Jesus College after the war had started: ‘We came up in October to find the streets desolate indeed … one seldom met, never heard, an undergraduate… As I looked down the hall [at the College], this one undergraduates’ table reminded me of a road in the West Country I had followed a few days before, with the telegraph running beside it and on the wires the swallows gathering, discussing flight’.

Young Findlay obtained his commission as a 2nd Lieutenant at the end of that term, in the York and Lancaster Regiment, just after his 18th birthday.   He died of wounds in Flanders on 10 August 1915, only eight months later. He was wounded while superintending the digging of a communication trench up to a captured line in the trenches. His former headmaster said after his death that his ‘splendid influence for good, for justice and for pure manliness will long endure at the college’. 157 other members of the College were also killed.

The Memorial at Jesus College, Cambridge

All three of Sir John’s sons served in World War One. One, James, went on to have a distinguished career in the RNZAF during World War Two, rising to the rank of Air Commodore. 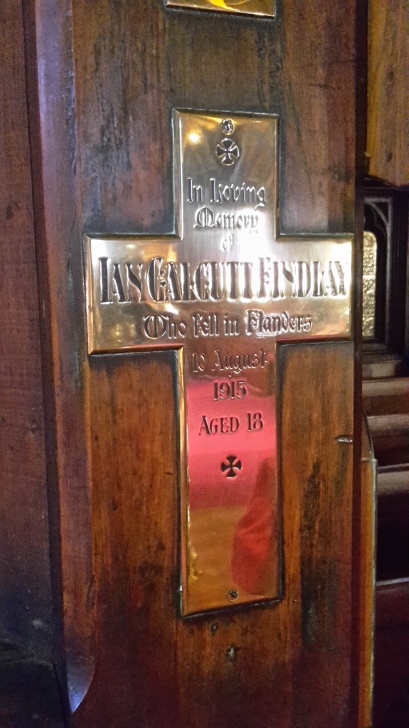