During the 1950s and 1960s heritage campaign to save Old St Paul’s from demolition or relocation, one of the campaigners, architect Roger Gibb, wrote to Bishop Baines and made a prediction of what Thorndon would be like in the future, and what Old St Paul’s role would be in that future.  He wrote that one day Thorndon would be ‘a forest of high modern buildings’ – and, he said, ‘I cannot see why old St Paul’s cannot fit in quietly and – as a blessing – into the scene’.

On the same theme, once the campaign had been successful and the church had been saved and restored, City Councillor D.G. Porter spoke at its reopening in 1970 of how the church would enrich the planned Government Centre in Thorndon, and that it ‘might even outlast the office buildings to be built around it’.

Almost 50 years later, both of these prophesies have come to pass.  Parts of Thorndon are indeed forests of tall buildings, but some of them were not built to last.  Two of the buildings which neighbour Old St Paul’s have been slated for demolition as a result of damage in the November 2016 earthquake.

The first of those is the neighbouring 10-storey Revera House on the corner of Mulgrave and Pipitea Streets. Revera House (previously Hitachi House), which was completed in 1990, will hardly be much mourned; it certainly isn’t the most beautiful building in Wellington, and was always massively out of scale with the rest of the buildings on Mulgrave Street.  It now has large cracks in its facades.  I understand that it has been deemed to be uneconomic to repair.  The process of demolition is be to take it down from the top by crane, with the roofs, concrete floors and external concrete panels, chained and lowered on to trucks for removal.  It had previously been expected that by July 2017 the building will be down to 5 stories, but apart from putting up scaffolding and shipping containers, not much work can be seen on site.  And is it possible they sent someone up the facade to paint over the cracks? 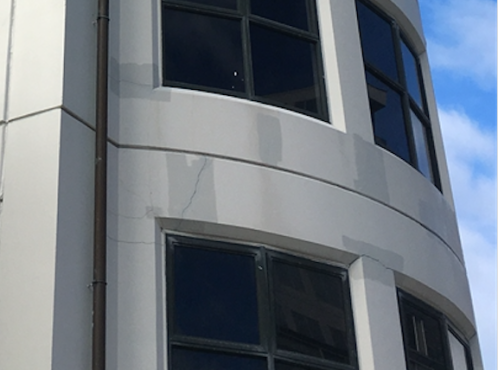 Hopefully it will be replaced by something which is more in scale with the rest of the buildings on the street, particularly Old St Paul’s, Bishopcourt and the old house which houses the Cook Island Embassy, on its other boundary.

But the process of demolition is going to be of concern for the people of Thorndon and for those who manage Old St Paul’s.  The owners of the building, Gunson Property Group, have had discussions with Old St Paul’s, the Friends of Old St Paul’s and with the Thorndon Resident’s Society.  For Old St Paul’s and Heritage New Zealand I suspect the traffic issues, disruption to events, bookings and tourists must be of real concern, as well as possible damage to the church during deconstruction of course, although of course everyone is working hard to ensure that doesn’t happen.  Personally, further down the line I also worry about the process of reconstruction, when something new goes up so close to the church. 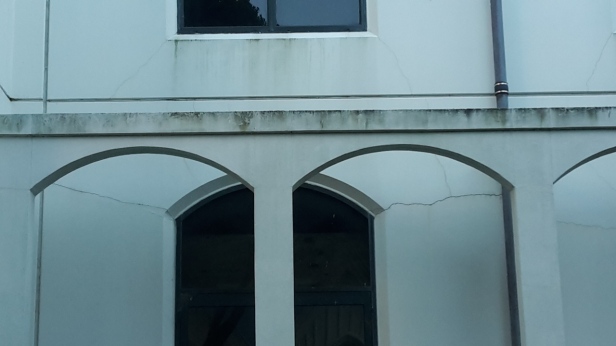 Also going down is the 9-storey Defence House on the opposite side of the road, on the corner of Aitken and Mulgrave Streets, which until November housed 1,200 workers for the Defence Force and the Ministry of Defence.  This building is only 10 years old.  Work on its demolition will being in coming weeks, and end in early 2018.

Old St Paul’s will survive these disruptions, of course, just as it has survived all the rest, and remain a ‘blessing in the scene’, but I am sure it is an anxious time for those charged with its care.

One thought on “Tumbling Down”